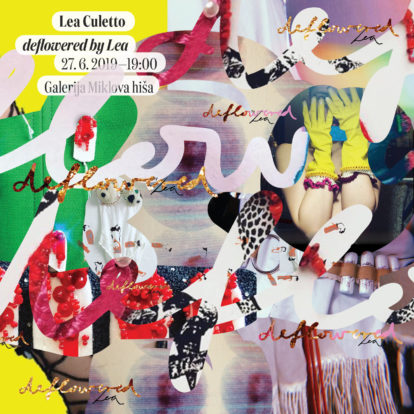 about artist and exhibition

Born in 1995 and graduated in 2016 from the Academy of Fine Arts and Design, University of Ljubljana, young Slovenian artist Lea Culetto stands out among the female artists of her generation for her ability to address sensitive topics, from menstruation to stretch marks, and to use problematic material, from menstrual blood to body hair, to make art that – far from being dramatic, disturbing and aggressive, is mostly intimate, delicate, fresh and pervaded by a sense of innocence and happiness. Culetto’s work focuses on the feminine body, and responds to the way it is shaped by the “male gaze” through fashion, advertising and the media – thus positioning herself in a long tradition of feminine – and feminist – art; her main media are embroidery and assemblage, used to produce garments and objects displayed in installations or site-specific interventions; she loves pink, dolphins and all that glitters. 1000 and One Nights is a floor installation made out of hundreds of bras; Your Housewife II is a video installation focused on the character of the housewife: in a set filled up with any sort of kitschy domestic knick knacks, from angels to trolls to madonnas to dolls painted in pink and glitter, a monitor shows the video of a woman wearing trashy fetish accessories, while preparing a  plucked hen in her kitchen; A Room of Her Own is a site specific installation done in an hotel room, where Lea Culetto embroidered her initials (LC) and the images of various domestic objects – underpants, a hairbrush, a razor, a whisk – on every pillow, sheet and blanket, in an act of personalisation and appropriation of an anonymous place; in Herbarium, she collects clumps, chunks from her menstrual blood and she displays them as they were dried flowers in an herbarium, or in shaped photo frames as they were pictures of relatives and ancestors; finally, My Life is a Hairy Tale is a series of wearable, skin colored collants decorated with braids made out of human hair: would female body hair become socially acceptable, were it “arranged” as a hairstyle?

Culetto will present in a gallery setup the most recent output of her visual research: the street fashion brand deflowered by Lea: a series of embroidered, wearable garments, marked by political, religious and feminist themes, combined into a whole with the help of kitsch esthetics and exaggeration. Troublesome topics – such as nipples, menstruation, stretch marks and body hair – are presented in unexpected ways, with irony used to discuss topics that are often perceived as taboo. In contrast with the fashion industry, which forces on us a model of the perfect body, causing in young people low self-esteem and various psychological and physical diseases, deflowered by Lea wants to spread a healthy and positive body image.

Using different techniques such as embroidery, ornamental stitching, beading, knitting, braiding etc., Lea combines fragments from damaged clothes, second-hand clothes and fabric, and this manual work gives a story to each garment. The humans wearing her designs – real, unretouched bodies – become a live gallery, bringing the ideas embedded in the clothes out into the streets.

Lea Culetto was born January 1995 in Trbovlje. After graduating (2013) from secondary school Gimnazija Celje – Center (art department) she enrolled in the painting study programme of the Academy of Fine Arts and Design, University of Ljubljana (UL ALUO). In September 2016, she graduated with the thesis Woman and fragments of the fashion industry.

She has participated in various group exhibitions in Ljubljana and abroad. Her first group exhibition Into the Space was held in Bežigrad Gallery I (2015), curated by Miloš Bašin. The same year she participated in the group exhibition named DSU ROG (Gallery Zelenica) with various well-known artists. In November 2016, her graduation project was represented at Transformation of Image, held at the Museum of Contemporary Art in Zagreb. In 2017, she had two exhibitions abroad, both in Athens, called ROOMS 2017, represented by Kappatos Gallery, followed by a few group exhibitions in Ljubljana, including Young Female Art in Šiška, curated by Žiga Kariž. In 2018, she participated in several exhibitions throughout Slovenia, among them, ObjectiFication at Gallery Alkatraz, which took place in the frame of the festival Red Dawns, and PREMIERA 2018 – 4th Triennial of Young Artists. Cultural Body, Space, Placements at the Gallery of Contemporary Art in Celje. Already in 2019, her work has been seen in the exhibition Feminist Art at UL ALUO, Part 1: One, Two … Five (Hairy) Proposals for an Éden Better Tomorrow (Gallery Alkatraz), for which a guided tour and its closing were part of the pre-festival activities of the 20th International Feminist and Queer Festival Red Dawns and in the exhibition Strands, created within the initiative ČIPke, which was also part of the 7th Festival Deuje babe in Cerkno.

Lea Culetto is currently finishing her postgraduate studies at UL ALUO. She received the UL ALUO Recognition for exceptional achievements in the academic year 2014/15 in the course Painting IV; in 2018, she received the UL ALUO Award for her “sharp, original approach to the thematisation of taboos in connection with the female body through a diverse range of approaches in the field of contemporary art”.

Production: Galerija Miklova hiša and Aksioma – Institute for Contemporary Art, Ljubljana.
Supported by: Municipality of Ribnica, Municipality of Ljubljana and Ministry of Culture of the Republic of Slovenia.